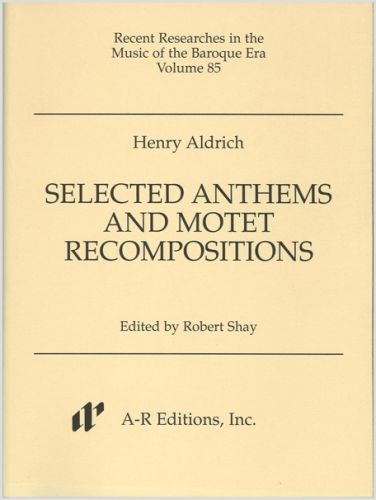 Aldrich: Out of the deep
Aldrich: O praise the Lord
Aldrich: God is our hope and strength
Aldrich: O give thanks
Aldrich: I waited patiently
Aldrich: Have mercy upon me
Aldrich: Give the king thy judgments
Aldrich: We have heard with our ears
Aldrich: My heart is fixed
Aldrich: Be not wroth
Aldrich: O Lord I will praise thee
Aldrich: For Sion’s sake
Aldrich: I am well pleased
Abstract
Henry Aldrich (1648–1710) produced some sixty anthems, four sets of service music, and various ceremonial pieces, having worked throughout as an amateur. His compositions circulated widely beyond Oxford and are prominently represented in the extant eighteenth-century partbooks from the Chapel Royal. An important facet of his output are his recompositions (about thirty-five of his anthems fall into this category), works which take as models motets of Byrd, Carissimi, Palestrina, and others. Those works are not merely contrafacta, since they are fitted with new English texts and are altered musically as well, sometimes substantially. In Restoration England, Aldrich was largely unparalleled in working in such a manner, though his procedures are closely related to the educational methods of his time, which had relied heavily on the translation of venerable models. Selected Anthems and Motet Recompositions, the first modern publication of Aldrich's works, includes a representative overview of his anthems, both original and recomposed, and features many of the works that circulated most widely in Aldrich's day. The seven original anthems included here are both full and verse anthems, and the six recompositions show Aldrich's ability to recast the music of Palestrina, Byrd, and Carissimi.
Contents
Anthems
Out of the deep
O praise the Lord all ye heathen
God is our hope and strength
O give thanks
I waited patiently
Have mercy upon me
Give the king thy judgments
Motet Recompositions
We have heard with our ears
My heart is fixed
Be not wroth
O Lord I will praise thee
For Sion's sake
I am well pleased
Reviews
Bruce Wood, Early Music, November 1999
Copyright © 2022 A-R Editions. All rights reserved