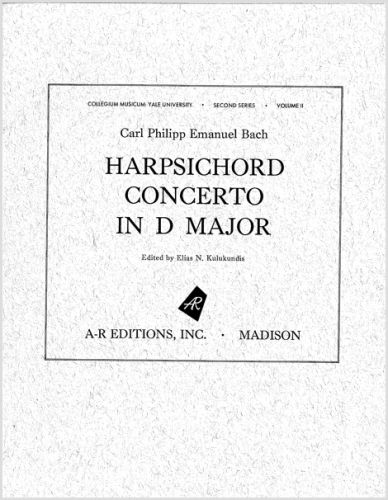 978-0-89579-024-8 Full Score (1970) 9x12, xiv + 72 pp.
$45.00
In stock
SKU
Y2-002
Add to Wish List
Abstract
The keyboard concertos of C. P. E. Bach, written for his own use, form the largest single group of orchestral works in his output, spanning his entire career.  The Concerto in D Major, W. 27, was written in Berlin in 1750 and was probably first performed there in the same year.  In keeping with his general practice, it consists of three movements in the sequence fast-slow-fast.  There are two distinct versions of the work, however: the first, preserved in the original autograph, calls only for the usual string orchestra to accompany the harpsichord, while a second version preserved in later sources expands the orchestra to include woodwinds, brass, and kettledrums.  The work was probably recast after 1775, during Bach’s Hamburg period, and it is this version that is published in the present edition.
Contents
Allegro
Siciliana
Allegro
Reviews
Peter Ward Jones, Music & Letters, July 1971.
Copyright © 2023 A-R Editions. All rights reserved