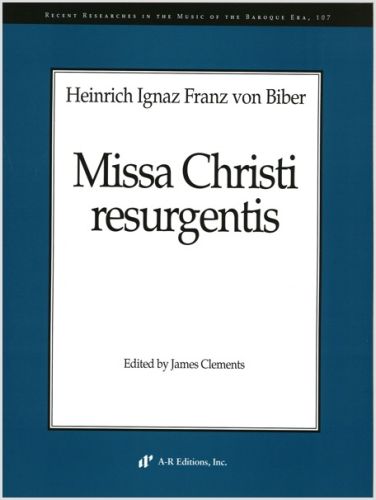 B107R
Biber: Missa Christi resurgentis (RENTAL)
Rental Parts (2013)
Set of 19 parts: clar. 1, 2; ctto. 1, 2; tbn. 1, 2, 3; strings: 33410; choral score
Abstract
Heinrich Ignaz Franz von Biber (1644–1704), best known today for his instrumental music, held posts at the archiepiscopal courts in Kroměříž (Moravia) and Salzburg and was also an accomplished composer of liturgical music.  Of his ten or so settings of the mass, the twenty-two-part Missa Christi resurgentis is his only authenticated concerted mass setting yet to be published for which all parts are extant.  This edition, based on the only surviving source now held in the music archives of the archbishop’s castle in Kromeríz, makes available for the for the first time a composition which reveals much about Biber’s polychoral style and the style of polychoral music performed in late-seventeenth-century Salzburg.  It also displays many stylistic similarities with the famous fifty-three-part Missa Salisburgenis—now thought to be by Biber—and is an important source for consolidating the claim for Biber’s authorship of that work.
The music is scored for Clarino 1, 2; Cornetto 1, 2; Trombone 1, 2, 3; Violino 1, 2; Viola 1, 2; Organo e Violone; Canto 1, 2; Alto 1, 2; Tenore 1, 2; Basso 1, 2, 3.
Contents
Sonata
Kyrie
Gloria
Credo
Sanctus
Agnus Dei
Reviews
Reviewer unknown, Toccata, 15, 2004.
Stephen Rose, Early Music, November 2001; response by James Clements, Early Music, May 2002
Copyright © 2022 A-R Editions. All rights reserved