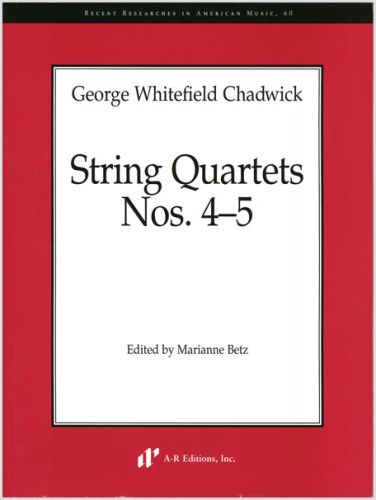 A060P1
Chadwick: String Quartet No. 4 (PARTS)
Instrumental Part(s) (2007)
Set of 4 parts (vn. 1, vn. 2, va., vc.)
A060P2
Chadwick: String Quartet No. 5 (PARTS)
Instrumental Part(s) (2007)
Set of 4 parts (vn. 1, vn. 2, va., vc.)
Abstract
The five string quartets of George Whitefield Chadwick (1854–1931) are important works in the composer's oeuvre, which hitherto, unfortunately, were hardly accessible. The fourth and fifth quartets, premiered in 1896 and 1901 by famous Boston ensembles, the Kneisel Quartet and the Adamowski Quartet, respectively, demonstrate Chadwick's mature style. In both works, the formal conception is more liberal than in the early quartets, revealing Chadwick as a composer at the height of his career. Besides their structural qualities the quartets display characteristics and sonorities that commentators labelled "Irish," "Gaelic," or "American," thus referring to what became part of Chadwick's very personal musical signature. His contributions to the highly ranked genre of the string quartet must be considered milestones in the repertoire of late-nineteenth-century chamber music. In these works, Chadwick demonstrated his skills as an eminent and individual composer, who proudly could declare that "my music is my own" and who wished for just one thing, to be "discovered at last!" This edition will contribute to making his music better known, primarily by making his quartets accessible, and also by providing an elaborate essay in which the genesis, reception history, and structural details of the works are considered in the context of the genre in the late nineteenth and early twentieth centuries.
Contents
String Quartet No. 4 in E Minor
I. Andante moderato; Allegro
II. Andantino semplice
III. Giocoso, un poco moderato
IV. Finale: Allegro molto risoluto
String Quartet No. 5 in D Minor
I. Allegro moderato
II. Andantino
III. Presto e leggiero
IV. Allegro vivace
Copyright © 2022 A-R Editions. All rights reserved