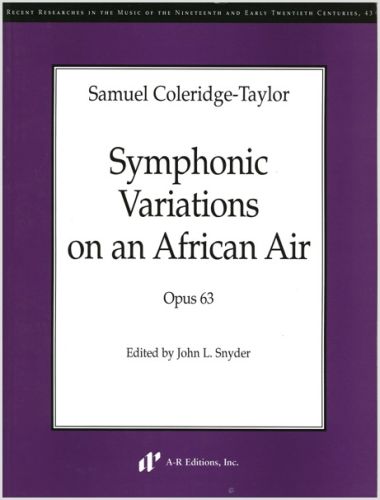 N043R
Coleridge-Taylor: Symphonic Variations on an African Air (RENTAL)
Rental Parts (2007)
Set of 57 parts: 3322 4231 timp., trgl., s.dr., cym., b.dr., harp 88664
Abstract
Samuel Coleridge-Taylor (1875–1912) was in his time among the foremost figures in British music. He burst onto the Victorian concert stage in 1898 with Hiawatha—temporarily eclipsing even Elgar—and remained in the public eye the rest of his short life. His orchestral work, Symphonic Variations on an African Air, composed in 1906, is based on an African-American song, "I'm troubled in mind." The work is interestingly structured, achieving a unity and direction rarely found in variation forms. More than eighty years ago the British musicologist Herbert Antcliffe lamented "the infrequency of... performances" of the work that  "in size... and... demand for orchestral resources, is the biggest of all Coleridge-Taylor's purely orchestral works." The piece is engaging, with enchanting melodic invention, a harmonic language that is both characteristically chromatic and modally tinged, and a fine sense of orchestral color. As Antcliffe says, "To those who really wish to know Coleridge-Taylor... no single work of his will reveal him more fully."
Copyright © 2022 A-R Editions. All rights reserved