Coleridge-Taylor: Symphony in A Minor, Opus 8 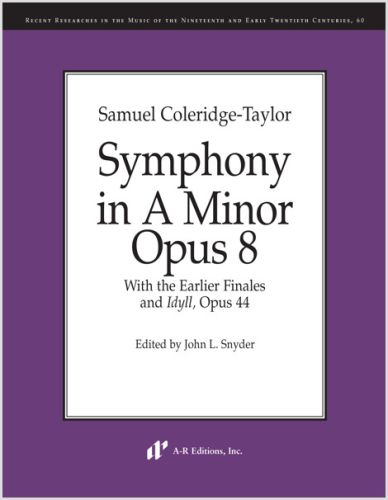 Click for samples
Samuel Coleridge-Taylor
Symphony in A Minor, Opus 8
With the Earlier Finales and Idyll, Opus 44

N060R3
Coleridge-Taylor: Idyll, Opus 44 (RENTAL)
Rental Parts (2017)
2222 4231 timp., harp 88664
N060R1
Coleridge-Taylor: Symphony in A Minor, Opus 8 (RENTAL)
Rental Parts (2022)
2223 4231 timp. 88664
N060R2
Coleridge-Taylor: Earlier Finales for Symphony in A Minor, Opus 8 (RENTAL)
Rental Parts (2022)
2222 4231 timp. 88664
Abstract
Samuel Coleridge-Taylor began his only symphony as a student of Charles Villiers Stanford, as the major project for the 1895–96 season. This edition of his Symphony in A Minor, op. 8, includes the finale later added in 1900, as well as the two surviving discarded finales from 1896 and the revision of the slow movement issued in 1901 as Idyll, op. 44. The edition of the symphony is based on the autograph manuscripts, including autograph parts, now in the Royal College of Music Library and in the British Library. The extensive critical notes document the changes made by the composer, both in the score and in the process of copying parts. Coleridge-Taylor was concerned to make his symphony cyclic and struggled with how to accomplish that most effectively, as evidenced by the three finales. The Idyll is edited on the basis of a copyist’s score formerly in the Novello rental library and now in the Fleisher Collection of the Free Library of Philadelphia.
Contents
I. Allegro appassionato
II. Larghetto affettuoso
III. Scherzo: Allegro giocoso
IVc. Allegro maestoso ed energico
Appendix: Earlier Finales and "Idyll," Opus 44
IVa. Allegro energico alla marcia
IVb. Allegro alla marcia
Idyll, Opus 44
Copyright © 2022 A-R Editions. All rights reserved