Damrosch: Symphony in A Major 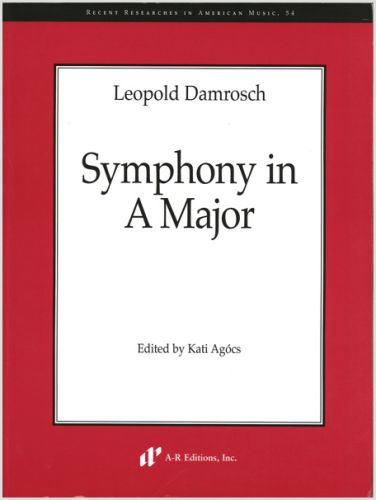 Click for samples
Leopold Damrosch
Symphony in A Major

A054 Damrosch: Symphony in A Major

A054R
Damrosch: Symphony in A Major (RENTAL)
Rental Parts (2005)
Set of 54 parts: 2223 4231 timp., tam-tam, cym. 88664
Abstract
This edition is the first publication of the Symphony in A Major by Leopold Damrosch (1832–85), composed in 1878 in New York. The patriarch of a family that created the foundations for classical music in America, Damrosch held positions in illustrious musical institutions of his native Germany and the respect of such figures as Liszt and Wagner prior to his 1871 immigration to the United States. Distinguished composer and renowned violinist, Damrosch was also a conductor who acted as a "missionary" for modern music by premiering important European works in America. The symphony is one of several symphonic compositions by Damrosch, including two violin concertos and the oratorio A Scriptural Idyll: Ruth and Naomi. Damrosch writes in the international symphonic idiom of the late 1870s, reflecting Beethoven’s influence in his scherzo while incorporating the chromatic voice leading of the "modernist" school. Thus the symphony occupies a fascinating position between Austro-German symphonic tradition and the New World.
Contents
I. Poco andante; Allegro vivace, con fuoco
II. Intermezzo scherzando: Vivace, con leggierezza
III. Quasi marcia; solenne
IV. Allegro vivace assai
Copyright © 2022 A-R Editions. All rights reserved