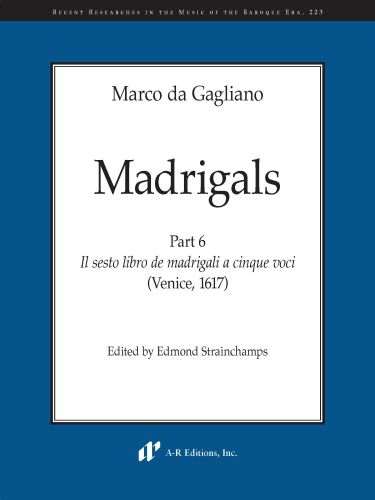 978-1-9872-0675-3 Full Score (2021) 9x12, xxi + 90 pp.
$150.00
In stock
SKU
B223
Add to Wish List
Abstract
Il sesto libro de madrigali a cinque voci, Marco da Gagliano’s final book in the genre, was published in 1617, nine years after its predecessor. In the book’s dedication Gagliano indicated that its music was composed the year before, and not earlier in the gap between the two books. Book 6 was popular enough that it was reprinted in 1620, and although he lived another twenty-six years, Gagliano published no more madrigals. There are sixteen compositions in the book, fourteen of them by Gagliano, one by Lodovico Arrighetti, and one by an unnamed composer who was most certainly Ferdinando Gonzaga, duke of Mantua. The poets now recognized as authors of the texts are Giovanni Battista Guarini, Torquato Tasso, Francesco Petrarca, Ottavio Rinuccini, Gabriello Chiabrera, Gasparo Murtola, and Antonio Ongaro. In the diversity of their style, the madrigals of the Sesto libro provide a conspectus of the compositional craft evinced in Gagliano’s earlier books: now the rush and brevity of canzonetta-influenced madrigals like those in the fourth and fifth books stand next to madrigals with the more traditional manner of text setting so often found in his first three books. There is also a drinking song that alternates duets with a refrain and a seven-voiced concertato piece, both taken from Medici court entertainments. One of the most telling madrigals in the book, “Filli, mentre ti bacio,” is an abbreviation and a recasting of the madrigal as it appears in his Primo libro, thereby disclosing the remarkable change in Gagliano’s aesthetic thinking about the genre during the fifteen years that lie between his first and last books. Shortly after the appearance of the Sesto libro, a vicious attack on its madrigals and on Gagliano himself was made by Mutio Effrem. Although its condemnation of the book on theoretical grounds is misguided and without merit, Effrem’s Censure seems to have damaged Gagliano’s standing in Florence and to some degree may have influenced his decision to abandon the genre.
Contents
Il sesto libro de madrigali a cinque voci
Dedication
1. La bella pargoletta (Torquato Tasso)
2. O dolce anima mia (Giovanni Battista Guarini)
3. Ché non mi date aita
4. Chi sete voi che saettate a morte
5. Occhi, no ’l vorrei dire
6. O com’in van credei
7. Movetevi a pietà del mio tormento, Lodovico Arrighetti
8. Occhi miei, ché ridete
9. Oimè, tu piangi, o Filli
10. Tanto è dolce il martire
11. Se più mirar meco non è speranza (Gabriello Chiabrera)
12. Io vidi in terra angelici costumi (Francesco Petrarca), Ferdinando Gonzaga
13. Filli, mentre ti bacio (Antonio Ongaro)
14. Volle mostrar ch’un giro (Gasparo Murtola)
15. Evoè! Padre Lieo, Tioneo (Gabriello Chiabrera)
16. Su l’affricane arene (Ottavio Rinuccini)
Bio
Edmond Strainchamps is an emeritus professor of music at the State University of New York and holds an appointment as resident scholar at Dartmouth College. His education, which was at Columbia University, led to his career in teaching (principally at NYU, Rutgers, and SUNY/Buffalo), which he combined with musicological research. He was for some years active as a serious jazz musician in Europe and the US, but ultimately preferred to make a career in academia. He has lived in both France and Italy and has returned to Europe, most often to Italy, for research into music and culture in the small princely courts of the sixteenth and seventeenth centuries, especially those of Mantua, Ferrara, and Florence. His research has been funded by a variety of grants, the most notable of which was a two-year appointment as a fellow of Villa I Tatti, the Harvard University Center for Italian Renaissance Studies in Florence. His publications include five books and a number of scholarly articles, the most recent of which comprises an inventory of the historical music extant in the church of San Lorenzo in Florence and a partial inventory and study of music in the Florence duomo, Santa Maria del Fiore. “Madrigal,” his history of the madrigal in three centuries and the scholarly literature pertaining to it, is available in Oxford Bibliographies Online. At present he is at work on a book on music in Florence during the seicento.
Copyright © 2022 A-R Editions. All rights reserved