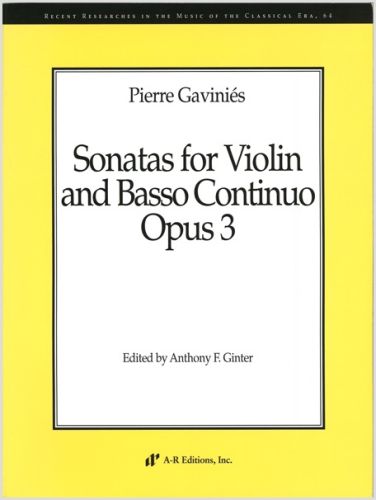 C064P
Gaviniés: Six Sonatas for Violin and Basso continuo, Op. 3 (PARTS)
Instrumental Part(s) (2002)
Set of 2 parts (vn.; b.c.)
Abstract
Pierre Gaviniés gained his reputation in Paris, where he enjoyed a long and active association with the Concert spirituel, the famous concert series that dominated the French musical scene throughout most of the eighteenth century. A Janus-like figure, Gaviniés composed these sonatas using the characteristically baroque (unrealized) basso continuo while at the same time incorporating the galant style in the violin part. As with his previous opus 1 sonatas (published as vol. 43 in this series), each of these sonatas contains three movements, and a fast-slow-fast tempo scheme predominates. Many of the fast movements show traits of the classical sonata-allegro form. The slow movements, short, lyrical, and highly expressive with few embellishments, provide contrast in mood and construction.
Contents
Sonata I
Allegro
Adagio
Presto