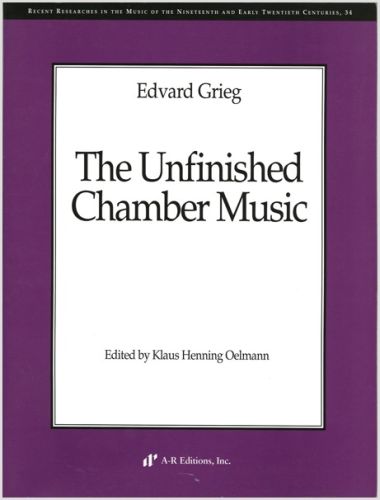 N034P
Grieg: Unfinished Chamber Music (PARTS)
Instrumental Part(s) (2002)
Parts (vn.1; vn. 2; va.; vc.)
Abstract
This publication presents the unfinished String Quartet in F Major, which Grieg began composing in the early 1890s. He completed the first two movements, most of the third, and started work on the fourth. The volume also includes a slow movement in C minor for piano trio and an unfinished movement in B-flat major for piano quintet. The music of this edition is based only on Grieg’s autographs as preserved in the Bergen Public Library. The introduction reviews biographical details related to the works and the history of the works after Grieg’s death. For the first time, all the written inscriptions on the manuscripts are considered in relation to the musical text. This results in clarifying the changes in the formal conceptions of the movements during the process of composition and subsequent revision, which, compared with previous editions, leads to adjustments of the length of both the trio movement and the coda of the quartet’s first movement.
Contents
String Quartet in F Major
I. Sostenuto; Allegro vivace e grazioso; Allegro agitato
II. Allegro scherzando
III. Adagio
IV. Allegro giocoso
Piano Trio Movement in C Minor
Andante con moto
Piano Quintet Movement in B-flat Major
[Moderato]
Copyright © 2022 A-R Editions. All rights reserved