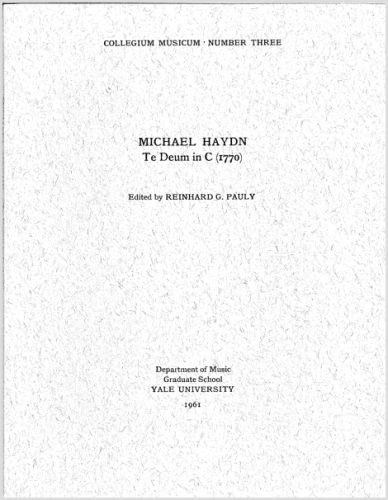 978-0-89579-364-5 Full Score (1961) 9x12, 97 pp.
$25.00
In stock
SKU
Y1-003
Add to Wish List
Abstract
Michael Haydn (1737–1806) composed works in nearly all categories required by musical practice in his day.  There has been general agreement, both in his day and our own, that his sacred works constitute the most important part of his oeuvre.  But while his motets have received their share of attention, his larger sacred works, including six settings of the Te Deum hymn, have for the most part fallen into oblivion.  The present edition of the Te Deum in C major of 1770 is based on the autograph score in Munich, Bayerische Staatsbibliothek, Mus. Ms. 455.  It is scored for four vocal parts (SATB), two clarini, two trumpets, timpani, two violins, and organo (presented with realized figured bass in the edition).  Haydn draws on the Gregorian Te deum laudamus in his setting, while the final fugue is one of several sacred works by Haydn that were copied by Mozart.
Contents
Te Deum laudamus
Sanctus Dominus Deus Sabaoth—Pleni sunt coeli et terra
Te gloriosus Apostolorum chorus—Tu Rex gloriae
Te ergo quaesumus
Aeterna fac cum Sanctis tuis
Reviews
Karl Geiringer, JAMS, Fall 1963.
Copyright © 2022 A-R Editions. All rights reserved