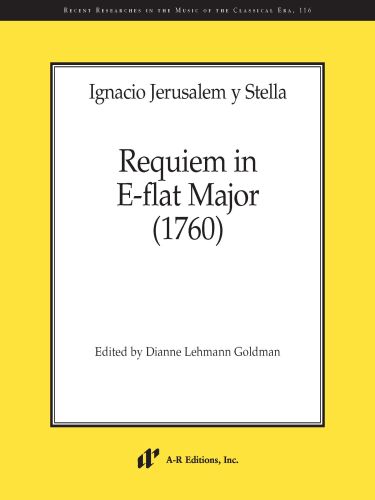 978-1-9872-0816-0 Full Score (2021) 9x12, xii + 138 pp.
$340.00
In stock
SKU
C116
Add to Wish List
Abstract
This volume presents the Requiem, including the Libera me responsory, that accompanied the celebration of the obsequies of King Ferdinand VI in Mexico, composed by Ignacio Jerusalem y Stella (1707–69). This work is the longest and most demanding composition of Jerusalem’s career, and it is an impressive liturgical piece given the comprehensive array of compositional styles and instrumentation he employs. This particular piece, as well as Jerusalem’s life and career as a whole, occupy the transitional phase between the baroque and classical styles better known as the galant style. In his Requiem, Jerusalem displays his ability to compose in every manner proper to the church during the mid-eighteenth century—homophony, imitation and fugue, baroque-style chord patterns, and classical instrumental and vocal passages. However, his upbringing near Naples in the early eighteenth century, his employment at the Neapolitan conservatory, and his time as a theater composer in Spain and Mexico made him most comfortable with those compositional aspects of the time that align more with the galant style.
Contents
Requiem aeternam
Kyrie
Dies irae
Rex tremendae
Quaerens me
Ingemisco
Preces meae
Confutatis
Lacrimosa
Domine Jesu Christe
Sanctus
Benedictus
Agnus Dei
Lux aeterna
Libera me
Copyright © 2022 A-R Editions. All rights reserved