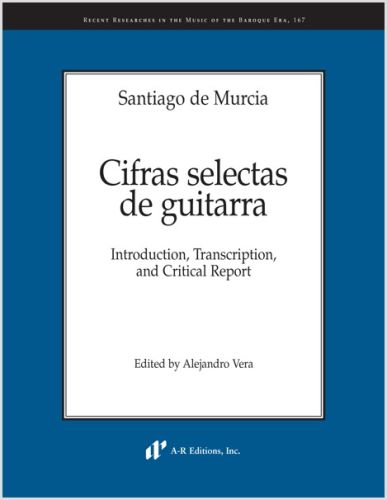 Add to Wish List
Abstract
This edition presents a detailed study and transcription of the manuscript “Cifras selectas ‎de guitarra” (1722) of Santiago de Murcia (1673–1739), as well as a complete facsimile ‎provided separately. While the study contributes new information about Murcia and fresh ‎perspectives on the circulation of baroque guitar music, particularly between Spain and ‎the New World, the facsimile and transcription are intended to allow performance of the ‎works in the collection by both baroque and modern guitarists. This source, found by the ‎editor in Santiago, Chile, during research undertaken between September 2003 and ‎August 2004, supplies a good number of new pieces, as well as alternative versions of ‎others included in Murcia’s previously-discovered sources—namely, the manuscripts ‎‎“Passacalles y obras de guitarra” (1732) and “Códice Saldívar no. 4,” and the print ‎‎Resumen de acompañar la parte con la guitarra (1714).‎
Copyright © 2023 A-R Editions. All rights reserved