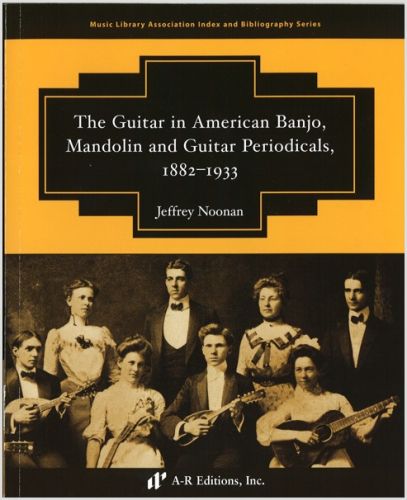 Click for samples
The Guitar in American Banjo, Mandolin, and Guitar Periodicals, 1882-1933

978-0-89579-644-8 Book (2009) 7.5 x 9.25, vii + 332 pp.
$50.00
In stock
SKU
IB035
Add to Wish List
Abstract
In the early years of the twentieth century, O.G. Sonneck, the father of American musicology, decried the state of musical bibliography in this country, encouraging musical scholars to dedicate themselves to preserving, cataloging, and promoting the use of America’s musical ephemera, especially newspapers and magazines. Despite his century-old calls, much work in this area remains undone. This volume responds to Sonneck’s call for action by creating a bibliography of periodicals that document the use and place of the guitar in a little-known segment of America’s musical culture in the final decades of the nineteenth century through the first third of the twentieth century.

Between 1880 and the mid-1930s, a unique musical movement grew and flourished in this country. Focused on the promotion of so-called “plectral instruments,” this movement promoted the banjo, the mandolin, and the guitar as cultivated instruments on a par with the classical violin or piano. The Banjo, Mandolin and Guitar (BMG) community consisted of instrument manufacturers, music publishers, professional teachers and composers, and amateur students. While some professional soloists achieved national recognition, the performing focus of the movement was ensemble work, with bands of banjos, mandolins and guitars ranging from quartets and quintets (modeled on the violin-family string ensembles) to festival orchestras of up to 400 players (mimicking the late romantic symphony orchestra). The repertoire of most ensembles included popular dances of the day as well as light classics, but more ambitious ensembles tackled Mozart, Haydn, Beethoven, and even Wagner.

Although this movement straddled both popular and cultivated (classical) music-making, its elitist pretensions contributed to its demise in the wake of the explosive growth of modern American popular music linked to Tin Pan Alley or the blues. While the movement’s heyday spanned the early years of audio recording, only a handful of active BMG performers made recordings. As a result few musical scholars are aware of the BMG movement and its contribution to American musical culture, especially its influence on the physical and technical development of America’s instrument, the guitar.

The movement did, however, leave extensive traces of itself in periodicals produced by manufacturing and publishing concerns. Beginning in 1882, the leadership of the BMG movement fell to the publishers, editors, and contributors from these promotional journals, which were dedicated to the “interests of Banjoists, Mandolinists and Guitarists” While advertising dominated the pages of most of these periodicals, nearly all offered product and publication reviews, historical surveys, biographical sketches, and technical advice. In addition, the BMG magazines not only documented performances with reviews and program lists but also contained musical scores for solo instruments and plucked-string ensembles. These magazines are the primary sources which document this vibrant expression of America’s musical life.

While one or two of the BMG magazines have been known by guitar scholars, most have not seen the light of day in decades. Similarly, a few of the leading guitar figures of the BMG movement—principally William Foden, Vahdah Olcott-Bickford, and George C. Krick—have been acknowledged and documented but many more remain completely anonymous. This bibliography offers access to the periodicals which help document the story of the guitar in America’s progressive era—a story of tradition and transformation—as lived and told by the guitar’s players, teachers, manufacturers, composers, and fans in the BMG movement.

The bibliography consists of two large sections. The first contains a chronological list of articles, news items, advertisements, illustrations, and photographs as well as a list of musical works for guitar published in the BMG magazines. The second section of the bibliography is a series of indices which link names and subjects to the lists. With nearly 5500 entries and over 100 pages of indices, this bibliography offers researchers access to a musical world that has been locked away on library shelves for the past century.
Contents
Acknowledgments
Introduction
The Banjo, Mandolin, and Guitar (BMG) Movement
Organization
The Sources
Abbreviations
Prose Writing, Advertisements, and Images
Guitar Music Scores
Indices
Index A: Names and Terms
Index B: Selected Advertising Materials
Index C: Compositions by Title
Index D: Instrumentation of Guitar Music Scores
Solos
Duos
Trios
Quartets
Mandolin Orchestra
Ensembles with Voice
Bio
Jeffrey Noonan, author of The Guitar in America: Victorian Era to Jazz Age (2008), has presented papers on the classical guitar in America at conferences across the country including presentations to the Society for American Music and the American Musical Instrument Society. An associate professor of music at Southeast Missouri State University, he teaches upper level music history and literature and directs the classical guitar program. As a performer, he appears with and directs a number of early music ensembles in the Midwest, playing lute, theorbo, and Renaissance and Baroque guitars.
Copyright © 2022 A-R Editions. All rights reserved