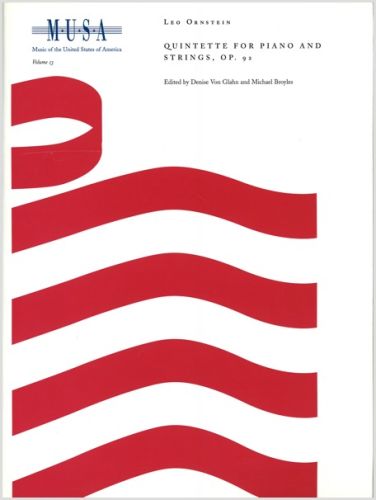 MU13P/A051P
Ornstein: Quintette for Piano and Strings, Op. 92 (PARTS)
Instrumental Part(s) (2005)
Set of 4 parts (vn. 1; vn. 2; va.; vc.)
Abstract
Leo Ornstein (1893–2002) was a wildly famous Russian-American pianist-composer who in the late 1910s simultaneously outraged and riveted audiences with his unprecedented dissonant piano works and then unexpectedly surprised them when he dropped out of sight to pursue a quieter life of composition and teaching. In 1927 Ornstein returned to the spotlight with a new work, his Quintette for Piano and Strings, op. 92. Here was a piece of breadth and scope reflective of a mature musical mind. Its lyricism and super-charged expressivity seemed to be in sharp contrast to the hammering physicality of Danse Sauvage or Suicide in an Airplane, two of the show-stoppers from his days as a touring virtuoso. But what many perceived to be a regression in style was in fact an expansion of that earlier voice, now more reflective, more thoughtful, more finished. Ornstein’s Quintette for Piano and Strings is an impassioned work that reveals the raw emotions of a proudly intuitive composer. It is a worthy companion to the quintets of Schumann, Brahms, Dvorák, Frank, Fauré, and Bloch, and like them it will stand the test of time.
Contents
I. Allegro barbaro
II. Andante lamentoso
III. Allegro agitato
Copyright © 2022 A-R Editions. All rights reserved