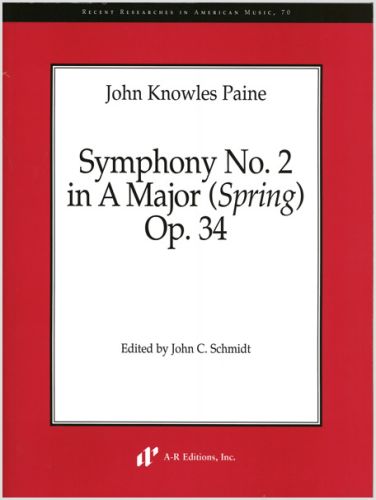 Click for samples
John Knowles Paine
Symphony No. 2 in A Major (Spring), Op. 34

A070R
Paine: Symphony No. 2 in A Major (<em>Spring</em>), Op. 34 (RENTAL)
Rental Parts (2012)
Set of 50 parts: 2222 4230 timp. 88664
Abstract
John Knowles Paine (1839–1906), the earliest of the Second New England School of American composers, was the first to gain the compositional craft needed to produce works equal in quality to those of his European contemporaries. His Symphony No. 2 in A Major (Spring) was first performed in March 1880 ‎and was published in full score and parts by Arthur P. Schmidt later that year. His first symphony, premiered in 1876, had shown a rather strict support for Beethoven’s ‎classicism, but the Spring symphony exhibits a richer chromatic vocabulary, colorful ‎orchestration, and Paine’s first use of thematic transformation in an orchestral work. The ‎composer attached programmatic titles to each of the four movements, although these ‎were not stressed in the earliest performances—and did not appear in the published ‎score—for fear of criticism from Boston’s conservative music community opposed to ‎program music. But concert programs from 1888 onwards included the titles. The present ‎edition corrects many errors from the original published score and makes available an ‎excellent example of Paine’s mature style, reportedly his favorite among his orchestral ‎works.‎
Contents
I. Adagio sostenuto; Allegro ma non troppo
II. Scherzo: Allegro
III. Adagio
IV. Allegro giojoso
Copyright © 2022 A-R Editions. All rights reserved