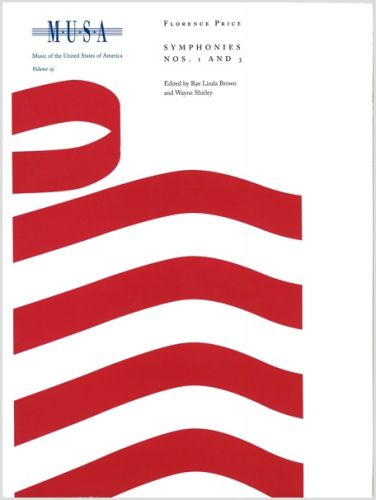 978-0-89579-638-7 Full Score (2008) 9x12, lii + 296 pp.
$225.00
In stock
SKU
MU19/A066
Add to Wish List
Abstract
Florence Beatrice Smith Price (1887–1953), who settled in Chicago in 1927, was the most widely known African-American woman composer from the 1930s until her death. This edition presents two important unpublished orchestral works: the Symphony No. 1 in E Minor (1932) and the Symphony No. 3 in C Minor (1940). The style of these works is quite different. Price's symphony in E minor is squarely in the nationalist tradition, and it may be more fully considered in the context of the Harlem Renaissance and the New Negro Movement of the 1920s and 1930s. Cultural characteristics are borne out in the pentatonic themes, call-and-response procedures, syncopated rhythms of the third movement's Juba dance, the preponderance of altered tones, and the timbral differentiation of instrumental choirs (the juxtaposition of the brass and woodwind choirs, for example).
The symphony in C minor was inspired by new philosophical, political, and social currents, stemming from the Chicago Renaissance, underway from 1935 to 1950. The Great Migration of blacks from the south to Chicago, the Depression, and the adjustment to urban life provided vivid life experiences as subject matter for Chicago Renaissance writers and artists (including Langston Hughes, Richard Wright, and Margaret Bonds). Price's third symphony, which omits overtly black themes and simple dance rhythms, presents a modern approach to composition—a synthesis, rather than a retrospective view, of African-American life and culture.
NB: Orchestral parts are available for hire from G. Schirmer: http://www.musicsalesclassical.com/composer/works/4938/19
Contents
Symphony no. 1 in E Minor
I. Allegro [ma] non troppo
II. Largo, maestoso
III. Juba Dance
IV. Finale