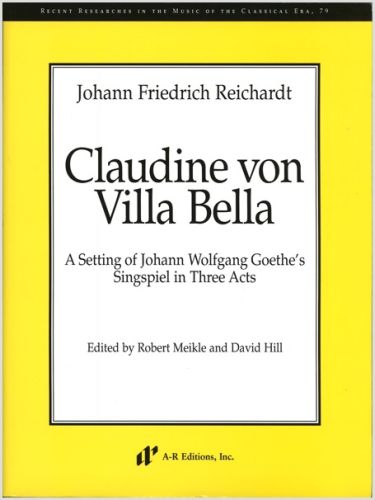 Add to Wish List
Abstract
"Reichardt has been good for me," remarked Goethe in April 1789, on receiving Reichardt’s setting of Claudine von Villa Bella, an Italian-style Singspiel adaptation of his earlier Schauspiel mit Gesang of the same name. The simple plot—an incognito ne’er-do-well of noble lineage ("Rugantino"/Carlos) leads a marauding band of fairly harmless outlaws, charms the heart of Claudine's cousin (Lucinde), reveals his true identity and is reconciled with his family, while Claudine and her sweetheart Pedro are united—is full of incident and provides Reichardt with the opportunity to give his characters as many musical genres as are found two years later in Mozart’s Die Zauberflöte. He moves from serenades in the simple volkstümlich style of which he was so fond to grand sonata-form opera seria arias, lusty drinking songs, lyrical strophic songs, and full-length finales, while Goethe’s spoken dialogue is in blank verse. After four initial documented Berlin performances in 1789 and a 1795 production in Weimar, Claudine has since been revived only once, and that in a drastically cut version in Königsberg in 1932 to mark the centenary of Goethe's death. It is well worth a modern and more faithful realization.
Copyright © 2022 A-R Editions. All rights reserved