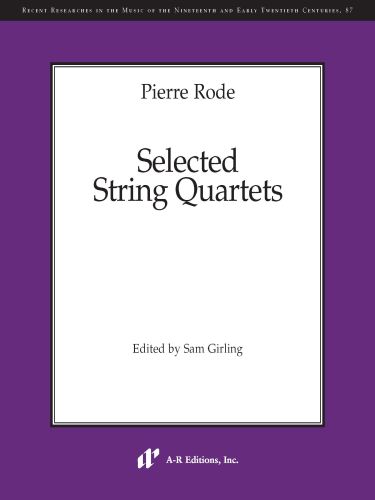 N087P
Rode: Selected String Quartets (PARTS)
Instrumental Part(s) (2023)
Set of 4 partbooks (vn. 1, vn. 2, va., vc.)
Abstract
Pierre Rode (1774–1830) was one of the finest violinists of his day, earning a reputation throughout Europe for his extraordinary and lavish virtuosity. His twenty-four pedagogical caprices and thirteen violin concertos are perhaps his most performed works today, and as such his rich and diverse contribution to string quartet repertoire has largely been forgotten. This edition presents a timeline of Rode’s relationship with the quartet: opus 11, written during the height of the French Revolutionary period, was clearly intended for private, domestic enjoyment; opus 18 provides a flashback to the quatuor concertante style of pre-revolutionary Paris that became synonymous with the likes of Giovanni Battista Viotti; opus 24 and opus posthume reflect the quatuor brillant, a virtuosic, concerto-like style of quartet that became all the rage in European musical centers in the second decade of the nineteenth century.
Contents
String Quartet in D Major, Op. 11, No. 3
I. Moderato
II. Andante con Variazioni
String Quartet in G Major, Op. 18
I. Adagio—Allegro moderato
II. Siciliano
III. Allegretto
Quatuor Brillant in G Minor, Op. 24, No. 2
I. Affettuoso
II. Andante
III. Agitato
Quatuor Brillant in C Major, Op. posthume, No. 2
I. Andantino—Allegro con fuoco et anima
II. Andante
III. Rondo
Bio
Sam Girling is a DAAD-funded research fellow at the Beethoven-Haus in Bonn. He completed his doctoral studies at the University of Auckland in 2018, for which he studied the socio-political context of unconventional (and hitherto unknown) works for percussion ca. 1800. In 2018 he started a postdoctoral project with Nancy November on string quartet culture in Beethoven’s Europe, giving particular attention to works by the French composer Pierre Rode. His current research concerns the chamber music of Franz Alexander Pössinger, particularly his arrangements of popular operatic works in the early nineteenth century.
Recent publications include a chapter on Clementi’s Waltzes Opp. 38–39, an article on the significance of the tambourine for women musicians in the early nineteenth-century salon, an article on the role of folk instruments in early nineteenth-century Austrian and Bohemian courts, and a chapter on Beethoven’s percussion writing in the Ninth Symphony.
Sam continues to lecture on a variety of music theory and history topics at the University of Auckland. He has given pre-concert talks for the Auckland Philharmonia and recently gave an interview on the music of John Abraham Fisher for BBC Radio 3.
Copyright © 2023 A-R Editions. All rights reserved