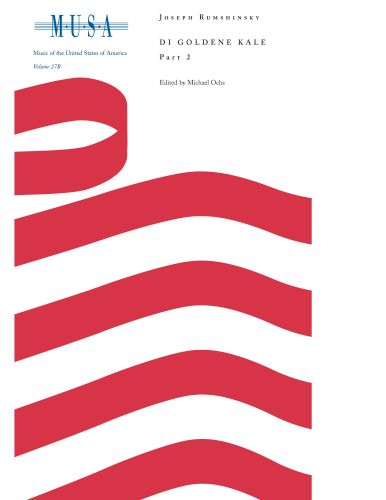 MU27P/A080P
Rumshinsky: Di goldene kale (PV Score)
Keyboard-Vocal Score (2019)
MU27R/A080R
Rumshinsky: Di goldene kale (RENTAL)
Rental Parts (2019)
Set of 22 parts: 1110 0210 bells, perc., pno. (2 books), 33221 errata
Abstract
The Yiddish-American musical theater of the 1920s served to help Jewish immigrants from Eastern Europe make meaning of their lives as strangers in this new land. Like most earlier and later newcomers to America, they faced homesickness, deprivation, and language difficulty. The Yiddish musical helped them come to terms with their environment by reminding them of the "old home" while highlighting the benefits of the New World. It confronted the past with the present and fused the folkloric songs, liturgical chants, dances, and theater styles of Jewish music with American rhythms and social topics to help resolve on stage the conflicts and stalemates in the lives of new inhabitants. These comic and dramatic musical works chart the evolution of a community in its acculturation to America and its inevitable assimilation. This edition and study of a successful Yiddish musical will provide multifaceted insights into the absorption, not only of Jews, but of every immigrant group into the American mainstream.
Di goldene kale (The golden bride) was premiered at the 2,000-seat Second Avenue Theater in New York on February 9, 1923, one of fourteen Yiddish programs in the city that night. It ran for eighteen weeks and was then performed in Boston, Philadelphia, and other American cities, as well as Buenos Aires and venues in Europe. Thirteen recordings of songs from the show were released at the time, sheet music for two numbers was published, and it was still being performed twenty-five years later. It was written and produced at a critical time of transition, between a law passed in May 1921 that greatly limited immigration from eastern Europe and another, in 1924, that reduced such immigration to a trickle. Thus it represents—and illuminates—the period in the United States in which the arrival of some two million Russian and other east-European “foreigners” had peaked. While no single work can embody the wealth of diversity found in the Yiddish musical genre during its flourishing years—the 1880s to the 1940s—Di goldene kale offers an especially rich sampling of traits that audiences of the period could expect. The music is by Joseph Rumshinsky, the undisputed dean of Yiddish operetta composers in the U.S. (aptly called “the Jewish Victor Herbert”), who wrote the music for well over 100 such works. The libretto is by Frieda Freiman, about whom almost nothing is known except that some of her scripts, including this one, have been erroneously credited to her husband, Louis Freiman. The lyrics are by Louis Gilrod, who collaborated with leading composers of Yiddish songs and musicals.
This edition includes the full score, lyrics, and libretto in transliterated Yiddish, together with an English translation. This work is the first from the entire Yiddish-American musical stage to appear in print in any form other than vocal scores of individual songs.
A piano-vocal score and rental orchestral parts are in preparation.
Contents
Tsveyter Akt / Act Two
Introduction to Act 2 (Orchestra)
Dialogue 9A
No. 10. Solo with Women’s Chorus: “Mir zenen ale meydlekh” (Kalmen,
Chorus)
Dialogue 10A
No. 11. Aria: “Viglid” (Golde)
Dialogue 11A
No. 12. Aria: “A grus fun dem nayen rusland” (Misha)
Dialogue 12A
No. 13. Duet: “Mir zenen aktyorn”( Khane, Jerome)
Dialogue 13A
No. 14. Finale, Act Two: “Der masknbal” (Ensemble)
Accompanied Dialogue 14A
Dialogue 14B
Driter Akt / Act Three
Dialogue 14C
No. 15. Duet: “Zise derinerung” (Golde, Misha)
No. 16. Finale: “Mir vintshn ale” (Ensemble)
Libretto and Translation
Copyright © 2023 A-R Editions. All rights reserved