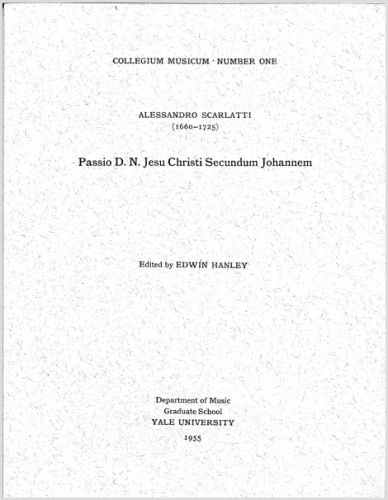 Y1-001CH
Scarlatti, A.: Passio D. N. Jesu Christi Secundum Johannem (CHORAL SCORE)
Choral Score (1955)
Part (Choral score)
Abstract
Various library catalogues list at least one hundred Passions by Italian composers of the baroque era, some of high rank—Scarlatti, Perti, Feo, and Jommelli—but these works have remained almost unconsidered.  The present work (which uses, in addition to the vocal performers and the basso continuo, a four-part string orchestra) dates from early in Scarlatti’s career, perhaps 1680. It is apparently unique among its contemporaries in the severity of its observance of liturgical function and in the economy with which it represents the scriptural text.  Except for fourteen extremely short turbe, the entire work is in stile recitativo, with no arias or formally organized choral movements.  It is possible that Scarlatti sought to capture an archaic flavor in the Passion recitative, perhaps in an effort to distinguish it from current secular forms.  There is considerable historical significance in Scarlatti’s almost exclusive reliance upon stile recitativo throughout an entire work, testimony to his continued belief in its power as a vehicle of dramatic expressiveness.
Reviews
Edward J. Dent, Notes, December 1955.
Copyright © 2023 A-R Editions. All rights reserved