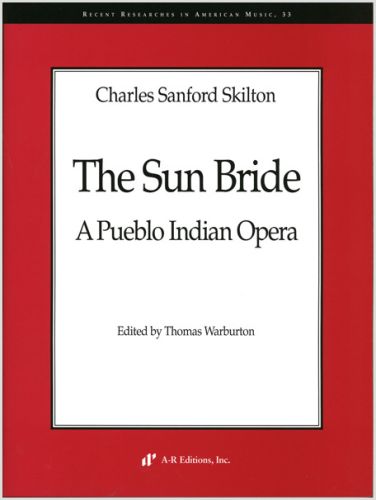 A033 Skilton: The Sun Bride

978-0-89579-437-6 Full Score (1999) 9x12, xxix + 135 pp.
$67.00
In stock
SKU
A033
Add to Wish List
Abstract
Charles Sanford Skilton's opera The Sun Bride was heard infrequently at the time of its composition. Based on a legend of the Pueblo Indians from the four-corners area of the United States, the libretto by Lilian White Spencer relates the story of the brave Bluefeather, who falls in love with the Bonita clan's Sun Bride. The plot also serves as a frame for the depiction of Indian ceremonies and games, which have their foundation in Skilton's research into Pueblo music and lore. The opera is presented in piano-vocal score, since it was most often performed in this way. The edition includes two plates, which juxtapose the piano-vocal score with the orchestral score.
Contents
Prelude
Scene 1
Interlude 1
Scene 2
Interlude 2
Scene 3
Interlude 3
Scene 4 (Finale)
Reviews
Catherine Parsons Smith, Notes, March 2001
Copyright © 2022 A-R Editions. All rights reserved