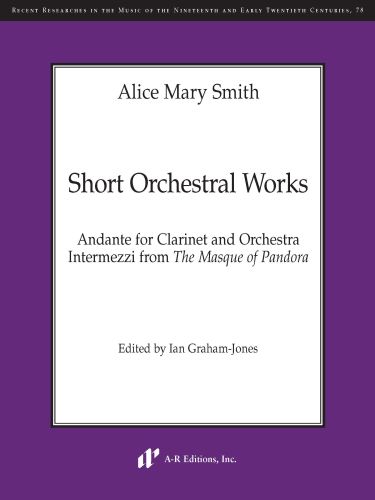 Click for samples
Alice Mary Smith
Short Orchestral Works
Andante for Clarinet and Orchestra; Intermezzi from The Masque of Pandora

N078P
Smith: Andante for Clarinet and Orchestra (PARTS)
Instrumental Part(s) (2020)
Set of 2 partbooks (solo cl.; piano)
N078R1
Smith: Andante for Clarinet and Orchestra (RENTAL)
Rental Parts (2020)
2212 2200 timp. 66443
N078R2
Smith: Intermezzi from <em>The Masque of Pandora</em> (RENTAL)
Rental Parts (2020)
2222 eng hn 4000 66443
Abstract
One of the most prolific women composers of her time, Alice Mary Smith (1839–84) produced the greatest number of publicly performed large-scale orchestral and choral works of any of her gender. This edition presents three of her short orchestral compositions for the first time in print. The Andante for Clarinet and Orchestra, an orchestral transcription of the slow movement of Smith’s Sonata for Clarinet and Piano of 1870, was greatly admired by the English clarinetist Henry Lazarus, who performed it multiple times. The two intermezzi, along with the overture, comprise the complete orchestral music from Smith’s grand choral cantata The Masque of Pandora, a setting of Henry Wadsworth Longfellow’s epic poem. Designed as independent instrumental movements, Smith fully orchestrated the intermezzi for a performance in 1879 by the New Philharmonic Society under William Ganz. In the introduction to the edition, Graham-Jones includes a brief biography of Smith and reproduces numerous reviews and program notes from the various performances of these three works.
Contents
Andante for Clarinet and Orchestra
Intermezzi from The Masque of Pandora
Intermezzo No. 1. After the Storm
Intermezzo No. 2. In the Garden
Bio
Ian Graham-Jones received his musical education at the Royal Academy of Music, where he won prizes for musicology and aural training, obtaining his B. Mus. degree. Here he took a keen interest in research and early music, joining the English Consort of Viols for a number of years. As Director of the Cornwall Rural Music School he conducted the Cornwall Symphony Orchestra and was subsequently made a Bard of the Cornish Gorsedd for services to music in that county. He was later Head of Music at Chichester College in West Sussex, where he established A-Level and post A-Level courses while continuing to undertake examining work and as an Associate Lecturer for the Open University’s music courses. Besides the Alice Mary Smith publications with Hildegard Publishing (the Sonata for Clarinet and Piano and String Quartet no. 3 in A Major) and A-R Editions, his other publications include harmony textbooks, duets, and suites for bass viol by Benjamin Hely, as well as music for lyra viol in tablature.
Copyright © 2022 A-R Editions. All rights reserved