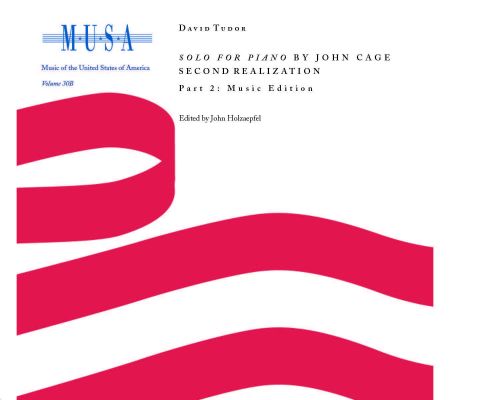 978-1-9872-0304-2 Keyboard Score (2020) 10x8, [viii] + 92 pp.
$100.00
In stock
SKU
MU30B/A087
Add to Wish List
Abstract
“When I think of music, I think of you and vice-versa,” John Cage told David Tudor in the summer of 1951. Looking back years later, Cage said that every work he composed in the ensuing two decades was composed for Tudor—even if it was not written for the piano, Tudor’s nominal instrument.
The collaboration of Cage and Tudor reached an apex in the Solo for Piano from Cage’s Concert for Piano and Orchestra (1957–58). None of Cage’s previous works had employed more than a single type of notation. In contrast, the Solo for Piano consists of eighty-four notational types, ranging from standard line-and-staff notation to extravagant musical graphics. The notational complexity of the Solo for Piano led Tudor to write out—or realize—a performance score, from which he played at the premiere of the Concert for Piano and Orchestra in May 1958. The next spring, when Cage requested music to complement his ninety-minute lecture “Indeterminacy,” Tudor created a second realization, for which he devised a new temporal structure to implement Cage’s notations.
This edition of Tudor’s second realization of the Solo for Piano presents Tudor’s performance score in the spatial-temporal layout of its proportional notation. An introductory essay discusses the early collaborations of Cage and Tudor, as well as the genesis, creative process, and performance history of the Solo for Piano. The critical commentary examines each of Tudor’s methods of realization; which notations from Cage’s score Tudor selected and why; how Tudor interpreted Cage’s often ambiguous performance instructions; how Tudor distributed the resulting sounds temporally; and the ways in which Tudor’s realization fulfills, transcends, and sometimes contravenes the instructions of Cage’s score.
Copyright © 2023 A-R Editions. All rights reserved