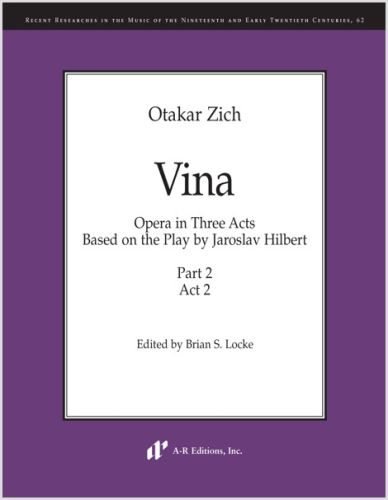 978-0-89579-789-6 Full Score (2014) 9x12, vi + [187-]454 pp.
Special Price $300.00 Regular Price $375.00
In stock
SKU
N062
Add to Wish List
Abstract
The opera Vina (Guilt), by the Czech composer Otakar Zich (1879–1934), was one of the most highly anticipated—and hotly debated—musical premieres at Prague’s National Theatre in 1922. Composed between 1911 and 1915, Vina's full-length, three-act score reflects many trends of its time, including a post-Wagnerian motivic web, lush Straussian orchestration, and a quasi-tonal harmonic content derived mostly from a linear, contrapuntal texture. Zich compiled the prose libretto from the 1896 play of the same title by Jaroslav Hilbert, an Ibsenesque parlor tragedy that retained its popularity for over a quarter-century. His compositional technique reaches its height during the heroine’s "letter without words," a scene accompanied by a brilliant polytonal fugue for full orchestra. Despite its many accomplishments, Zich’s Vina met with critical controversy after its premiere, provoking opposing forces to support or oppose musical modernism, which with this opera had firmly taken root in the Czech Lands.
Contents
Act 2
Copyright © 2022 A-R Editions. All rights reserved